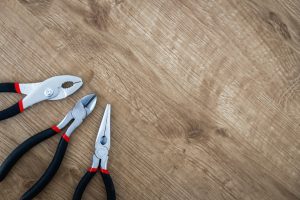 When someone asks, ‘Can you get me a pair of pliers?” you don’t really much about it. Typically you go and grab a single tool out of the toolbox and bring it back. The thing is, when it comes to diversity, pliers are full of it. You have pliers for automotive work, jewelrymaking, fabrics, and more! In today’s article we are going to talk about some of the many different types of pliers which you may or may not have known were out there. Who knows? Depending on your hobbies and crafts, we might inspire you to research a particular type to get a pair on your own! Let’s talk about 20 types of pliers that every craftsman should know about!

Cutting, turning, and holding.. The meat and bread of Pliers

What pliers can do is pretty much in the category of one to three things. They are great for holding, turning, and cutting, but they have become extremely specialized. So, how many different types of pliers are there? The answer will depend a bit on who you ask. Some say there are really only 9 types of pliers and television handyman Bob Vila’s website states there are really only 5, but we feel that this is only accomplished by making some fairly generalized categories to lump a large number of tools in. To get an answer we did some checking and found a company called Knipex who specialize in pliers. They say that around 100 different types of pliers exist and after the research we did to provide you with some examples we are inclined to believe them. Cutting, turning, holding… those are the functions, but the form and applications change with the medium which you are working with.

How pliers are designed

Standard pliers are the basic design on which all of the others are based. The proper nomenclature and function of the various parts are as follows:

See also  What Is The Best Mortar Removal Tool?

Now that we have gone into the basic function, let’s move on to some of the types of pliers which you may find. As you will see, there are many specialized varieties and who knows? You might find that there are types of pliers that can save you a lot of time when it comes to repairs or your own hobbies. Let’s take a look! 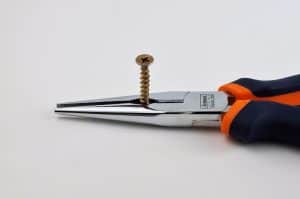 These are the pliers that many use the most but here is a description for those who have never used them. Needle nose pliers taper into a sharp v-shape, with gripping ridges on the undersides, and they have a number of uses. Needle nosed pliers are used in jewelry making, electrical, fishing, and even in electronics, for stripping and cutting wire. If you only own one set of pliers, these are generally the ones that you want to have.

Speaking of cutting and stripping wires, there is actually a more specialized set of pliers that you can employ for this and people who work in telecommunications and networking use these every day. Crimping pliers have a square shape at the end, with portions where the wire can be stripped or cut, depending on the pressure which you apply.  If you ever need to fix a wire with a short in it, these are great pliers to have.

This is one of the other types of pliers which folks are most used to seeing. Slip joint pliers are the pliers which have notches in them which you may use to adjust the fulcrum

point of the pliers when their jaws are open. Also known as ‘water pump pliers’, these are great for plumbing or can even just be used in lieu of a wrench when you need one.

Tongue and groove pliers are another variety which you have seen. These employ a longer groove, which allow you to slide and lock the lower jaw in different positions depending upon the jaw-width you need for the pliers. This makes them useful for tightening or loosening nuts and bolts of various sizes so this is a good pair of pliers to keep in the toolbox.

Canvas pliers have wide and rectangular shaped ends which have a flat surface and allow for the stretching of canvas. This allows for one person to stretch a canvas on their own without assistance, so they can be useful but in a very specialized fashion. 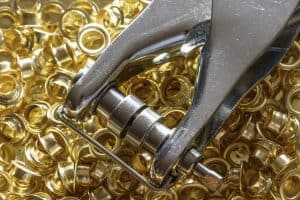 Those round metal holes that you have in shirts and other garments are called ‘eyelets’ and these pliers are designed so that you can place and crimp them securely to make them into part of a garment. Generally made of stainless steel, they have a spring in the jaw and towards the tips of the jaw are circular, rounded posts with smaller posts in their center which ‘crimp’ together to secure the eyelets so that the garments may then be laced.

Very similar to Needle Nosed Pliers, Chain Nosed Pliers are a little bit thinner and have a stubbed-nose at their tips, ideal for shaping wire and for jewelrymaking.

These are a very specialized set of pliers which feature jaws that slightly resemble lobster claws or the claws you might see on a hammer, although they are asymmetrical, with one side being curved and the other is hooked.  Utilized by many DIY and professional mechanics, these pliers allow you to change out brake springs, with one side allowing you to better install the spring and the shorter side allowing you to tighten it.

These are the most common pliers that you will see although you may not have known the official name for them. Linesman pliers have the ridged jaws, the rounded ridged hollow close to the tips, and are typically made of stainless steel for a durable, strong grip.

Think of a set of snub-nosed, Needle Nose pliers without the ridges and you have a firm image of flat nose pliers in your mind. Designed for a grip that will hold but not damage, these pliers are often used in jewelrymaking and in electrical work and are also very good for crushing and removing parts of a piece that you need removed (such as beads or casting abnormalities).

Like the name implies, Spark Plug Pliers are used for automotive work, and the design is very recognizable as they are tipped with softened tongs at the end for gripping wires and, of course, spark plugs.

Think of Tongue and Groove Pliers but imagine them with padding on the upper and lower insides of the jaw and you have a pretty accurate vision of Soft Jaw Pliers. These are designed for when you want to avoid damaging soft metals and are utilized mostly in plumbing and with scuba diving equipment.

A cross between standard pliers and Needle Nose Pliers, it is unlikely that you will meet any professional welders who do NOT have a pair of these. They utilize heat-resistant handles and are typically spring-hinged, so that they may be easily used in high temperatures where gloves are required. Due to square protrusions on the design these can be used for hammering, removing wires, and ‘splatter’ removal.

These odd-looking pliers have cylindrical tubes for jaws, with the lower jaw being of a smaller diameter than the upper jaw, and they are typically made of stainless steel. These are typically employed with finesse in jewelrymaking and other crafts.

See also  Old Wilton Vise Identification? What You Should Know

Designed for removing anchor bolts and car pins, these pliers typically employ a bit of padding for grip and the jaws are elongated, tapering sharply towards each other towards the end. The padding helps to protect the skin and the jaw design makes it easier to wedge the pliers in such a way as to properly remove the pins, saving the Automotive tech a lot of time and trouble. 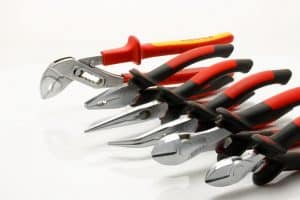 These pliers have a long, thin nose, rather like a fishing hook and are used in jewelrymaking and other crafts for the

“These pliers can also be used in tailoring as well”

removal of chain links or the separation of rings. Slightly asymmetrical, the lower jaw is flat while the upper jaw bears the hooked portion (sometimes including a notch in the center). Incidentally, these pliers can also be used in tailoring as well.

Often confused with eyelet pliers, these are similar in appearance but Grommet pliers are able to work with materials which possess a greater density and also work great when fixing fasteners.

These pliers have very short jaws, which form an oval shape and have flattened tips which pinch together tightly. This allows you to remove broken nails with much more ease than standard pliers, although they are considerably more expensive.

Bent Nose Pliers are a specialized form of Needle Nose Pliers, where the tips curve lightly upward towards the termination of the jaws. These allow for gripping in smaller working spaces and the amount of curve in the jaw is typically going to be 45 degrees to 90 degrees. These are mainly employed in jewelrymaking but due to their ability to get into tight spaces they are also quite useful for general repair.

Fencing Pliers are a variety of pliers which serve a combination of functions. In this case, 4 specifically:

The design is easy to recognize. They are typically made of iron, steel, or copper, and the jaws are small, thick, and powerful, with the upper jaw tapering up into a hook that faces the handles and a lower jaw that is flattened on the underside. Rather like a hammer with two handles and notches for wire-cutting, these are excellent when repairing fences.

Today we have celebrated the diversity of the common ol’ set of pliers. As you can see, what you can do with them is actually quite a lot! Spanning a number of different industries, some forms of pliers are always in play when it comes to making things that you use every day. They aren’t just limited to ‘standard’ and ‘needle-nosed’, so the next time that someone asks you to grab the pliers from their toolbox just be happy the selection there is limited… it certainly doesn’t have to be!

Garage Tool Advisor; “33 Different types of pliers and their uses”

We use cookies to ensure that we give you the best experience on our website. If you continue to use this site we will assume that you are happy with it.Ok